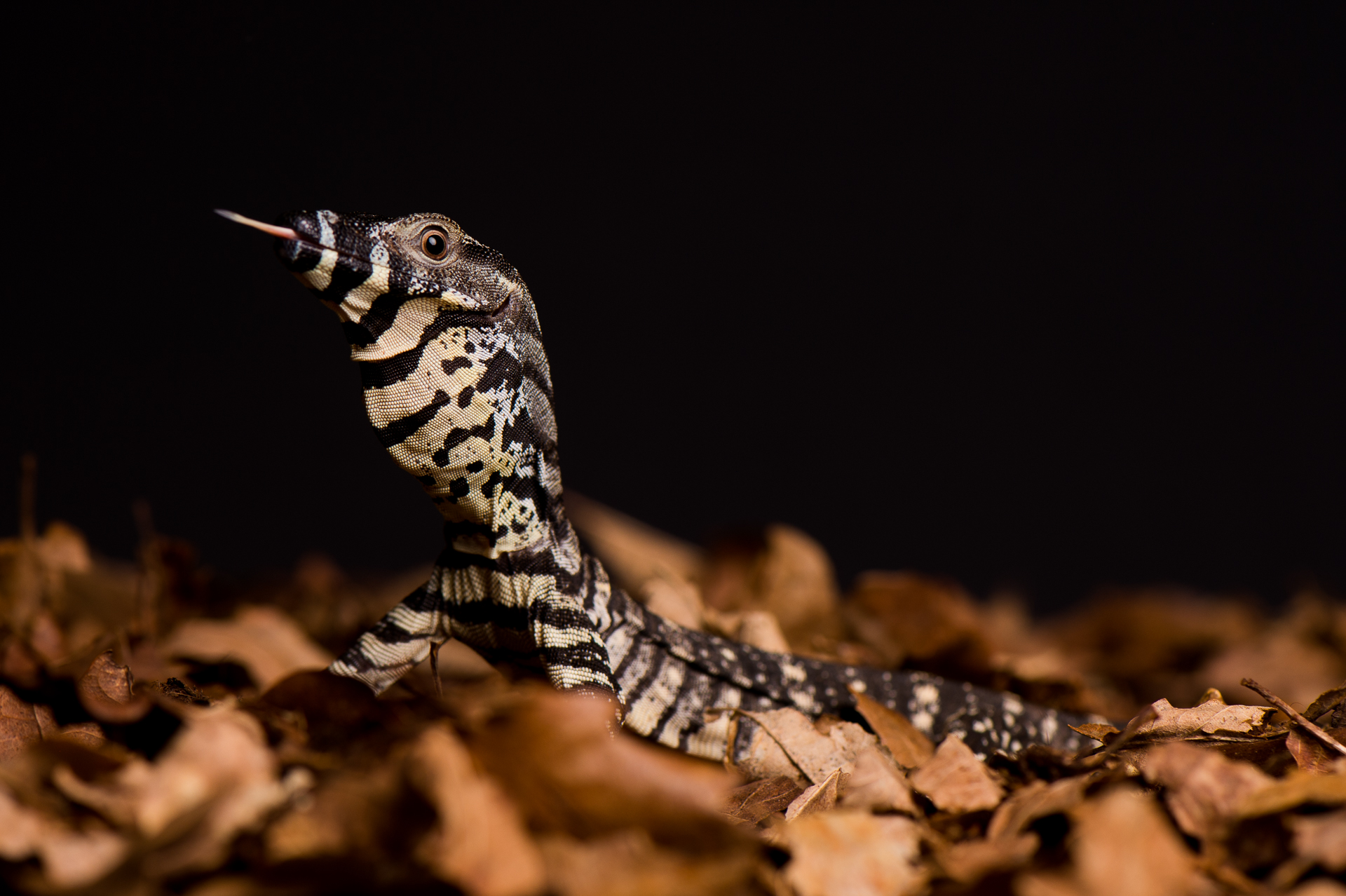 A couple of times a year I do workshops in macro- and reptile photography in various spaces in Norway. These are done in cooperation with my employer CEWE Norge/Japan Photo and several parks/zoos in Norway that keep reptiles. Usually I do some photography for them after or before the workshop. Here is some of the photos done at Kristiansand Dyrepark a couple of years back.

The pictures are of two different species of Australian knob-tail gecko, a young Lace Monitor and a Pacific Boa.

The lace monitor or lace goanna (Varanus varius) is a member of the monitor lizard family, Australian members of which are commonly known as goannas. It belongs to the subgenus Varanus.

Lace monitors are the second-largest monitor in Australia after the perentie. They can be as long as 2.1 m (over 6.8 ft) with a head-and-body length of up to 76.5 cm (2.5 ft). The tail is long and slender and about 1.5 times the length of the head and body. The maximum weight of lace monitor can be 20 kg (44 lb), but most adults are much smaller.

These common terrestrial and often arboreal monitors are found in eastern Australia and range from Cape Bedford on Cape York Peninsula to south-eastern South Australia. They frequent both open and closed forests and forage over long distances (up to 3 km a day).

They are mainly active from September to May, but are inactive in cooler weather and shelter in tree hollows or under fallen trees or large rocks.

The females lay four to 14 eggs in spring or summer in termite nests. They frequently attack the large composting nests of scrub turkeys to steal their eggs, and often show injuries on their tails inflicted by male scrub turkeys pecking at them to drive them away.

They are preyed upon by dingoes and birds of prey, and like all Australian goannas, they were a favourite traditional food of Australian Aboriginal peoples, and their fat was particularly valued as a medicine and for use in ceremonies.

Patterning
Lace monitors are found in two broad forms. The main form is dark grey to dull blueish-black with numerous, scattered, cream-colored spots. The snout is marked with prominent black and yellow bands extending under the chin and neck. The tail has narrow black and cream bands which are narrow and get wider towards the end of the tail.

The other type, known as Bells form, is typically found in dryer parts of NSW and Queensland. It has broad, black and yellow bands across the body and tail. Close up, these bands are made up of various spotted patterns.

Venom
In late 2005, University of Melbourne researchers discovered that all monitors may be somewhat venomous. Previously, bites inflicted by monitors were thought to be prone to infection because of bacteria in their mouths, but the researchers showed that the immediate effects may be caused by mild envenomation. Bites on the hand by Komodo dragons (V. komodoensis), perenties (V. giganteus), lace monitors (V. varius) and spotted tree monitors (V. scalaris) have been observed to cause swelling within minutes, localised disruption of blood clotting, and shooting pain up to the elbow, which can often last for several hours.

Washington State University biologist Kenneth V. Kardong and toxicologists Scott A. Weinstein and Tamara L. Smith, have stated that this allegation of venom glands «has had the effect of underestimating the variety of complex roles played by oral secretions in the biology of reptiles, produced a very narrow view of oral secretions and resulted in misinterpretation of reptilian evolution». According to these scientists «reptilian oral secretions contribute to many biological roles other than to quickly dispatch prey». They concluded that, «Calling all in this clade venomous implies an overall potential danger that does not exist, misleads in the assessment of medical risks, and confuses the biological assessment of squamate biochemical systems».

Get in touch with Thor